skip to main | skip to sidebar

I know, it's been a hell of a long time since I have posted anything on here. But, I realy have been busy! Taking a break to add a few updates. Been frantically preparing for Vintage Torquefest 2011.  Really been hitting the shows lately.
Kicked off the year with an indoor show at the Expo Center in Rock Island, IL back in January. A small indoor show and was really surprised by the foot traffic and sales at that show. Met a lot of great people at and had a great time.
Next up was Detroit Autorama. Had a blast as always! Set up a booth as part of Artist's Alley in the basement. Hung with my regular artist hombres, Ed Tillrock, Chad Lampert, Max Grundy, Josh Welton, Keith Weesner, Chris Piscitelli, Keven Carter, Bill Stinson, Mark Thompson and many more. It's also the only time I really get a chance to hang out with a lot of those guys, not to mention all my buddies from north of the border....The Stapley Brothers (Chris and Jeff) Ick, Jeff Lahti(Jeppa), The Marquartds, Ryan Thompson and many others.  Always a great time and I'm already looking forward to next year.

Tired and worn out, the following weekend, I managed to make it to Chicago World of Wheels and set up a booth with my good buddy Ed "the Graphite Gorilla" Tillrock. Many thanks to the Tillrocks for putting me up all weekend. The show started out as a nail biter but in the long run, turned out to be a really great show. Sales started out slow, but picked up gradually by Saturday. Again, met some really great folks, hung with some of my pals from the VooDoo Kings car club and managed to pick up some new clients.

Well, heres some samples of what I've been up to: 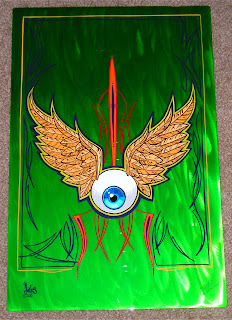 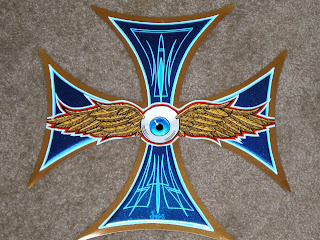 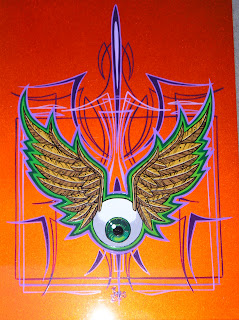 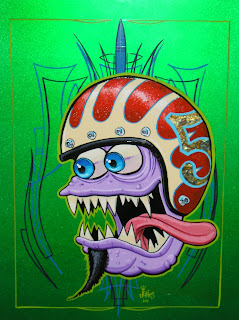 Against the Grain: The Skateboard Deck as Art

I was honored to invited to take part in the show alongside greats like The Pizz, Damian Fulton, Johnny Ace & Kali, Doug Dorr, Jason "3- Sheets" Janes, Ghost, Makoto, Mr. Wim (Jaime Trevino), Rich Luna... the list goes on. Super stoked that my good buddy Chad "Mototooner" Lampert will be sending out a deck too! 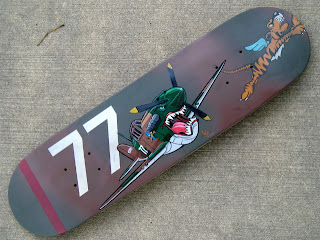 Posted by JonesDesign at 9:34 PM 5 comments:

This year, the Hunnert Car Pileup moved from Morris, IL (near Chicago) to the Central Illinois town of Decatur. The Chrome Czars put on such a great show every year, but they had finally outgrown their old location. For the first time at the new location called Progress City expo grounds, the show went great. Wather was in the upper 80's, barely a cloud in the sky, and an ocean of bad ass hotrods. The pre-party on Friday night, October 8th was held on the town square in the little town of Clinton, IL.

I was set up along with my great friends Chad Lampert and Ed Tillrock....here's our booths! 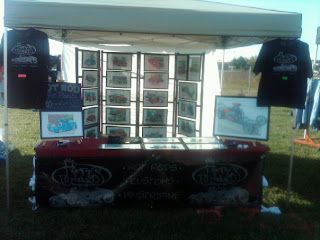 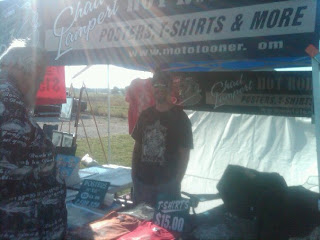 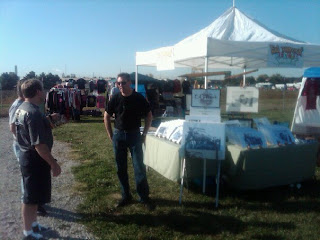 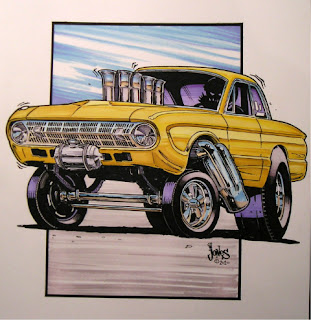 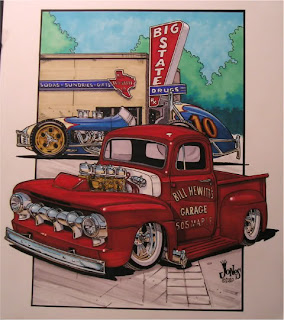 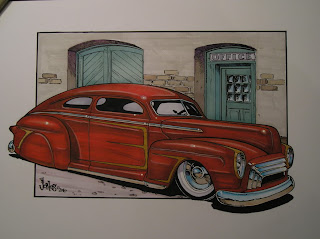 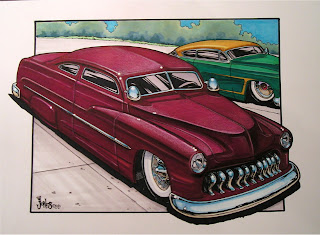 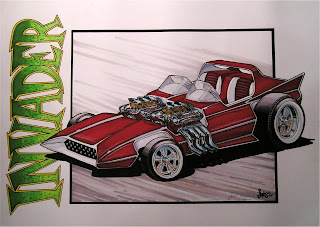 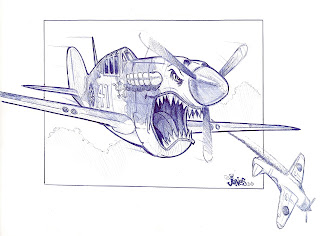 These are just half the illustrations I've completed in addition to multiple designs I can't publish yet. Yes, I've been busy....but having serious fun!
Posted by JonesDesign at 11:01 PM 3 comments:

I know, I know! I haven't posted shit in a long while. Been neglecting the ole blog like an unwanted bastard child! Believe me, I feel guilty. But, like the title says, I have been a busy boy of late.

Let me first start by giving a huge shout out and a GIANT thank you to John Dunn! He purchased my enamel painting titled "A New Way to Fly" from the Gasoline Gallery "Enamel" show curated by Jason"3-Sheets" Janes. John is a great due and a huge collector of lowbrow art. I am not only proud, but very honored that he found a piece of my art worthy of becoming a part of his legendary collection. Again, thanks, brotha!

Secondly, and no less important, an enormous thank you to Ian Monroe of Minneapolis for purchasing "Quite Frankly." My second painting submitted for the "Enamel" show. (See pics in my previous post). I had the pleasure of meeting Ian last month. What a great dude. And his passion for pinstriping and lowbrow art is inspiring! Thanks again, man!

Now, I've continued hitting the brushes and still keeping up with all of my illustration projects, tattoo designs, logo design and family life in general. Well....without further delay...here's a portion of the shit I've been working on. First...the enamel stuff: 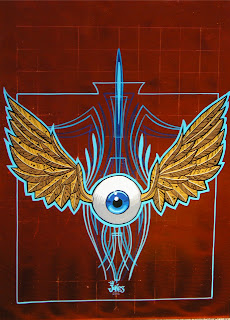 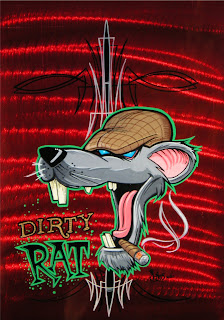 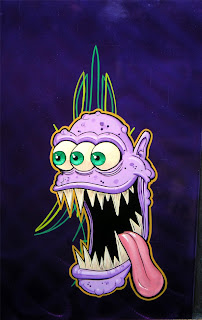 Well, I finally bit the bullet and saved up some Benjamins to get some Jones Design tee shirts done! People have been asking me for years to get some done up. So here they are...Available in size Large, XL and XXL for a mere $20.00 + Shipping: The design is a light grey on a black tee. Sure to please the eye! 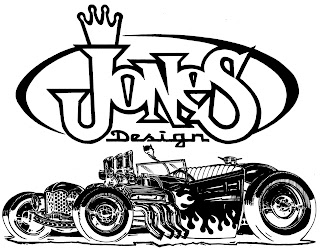 I also had the honor of being invited to submit a few paintings for the "Enamel" show at Gasoline Gallery in El Segundo, CA! The show was put togethter by Jason "3-Sheets" Janes and features some of the best Low Brow/Car Kulture artists in the world. I have the honor of having my art hang alongside the likes of Max Grundy, Steve Caballero, 3- Sheets, Kal, Ghost, Makoto, and many others.
Here are my two pieces for the show: 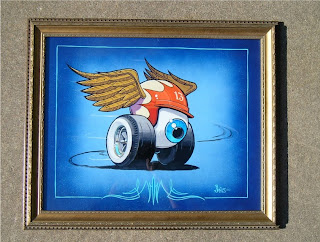 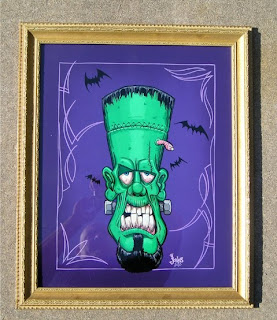 The show began on Saturday, August 7th and runs through September 18th. I am so stoked to be a part of this show!
I spent last weekend at the NSRA Nationals in Louisville, KY representing http://www.motorburg.com/ in our booth there. It was a great time and wonderful to meet Charlie Smith, Darrell Mayabb and Keith Daleen. I also had the pleasure of seeing Lance and Diane Sorchik again. Also a treat was getting to hang out with Larry Williams and collaborate on a '41 Willys 'toon, and also meet fellow automotive artists Colter O'Dell and Mike Lomaka! Great bunch of fellas! I had a blast. Meeting Ron Martinez(ower of the 1967-1968 AMBR winner- the Invader) and Egon Nacelis' family was a privilege.
Posted by JonesDesign at 12:04 PM 1 comment:

Have lots of exciting things going on. Of course, with spring here, and summer right around the corner, there's lots of car shows! I had the honor of painting up a replica of a German M40 WW II helmet for Vintage Torquefest. Many fantastic artists were invited to custom paint a helmet to donate to a charity auction, with proceeds to benefit http://www.helpinghannahsheart.org/ 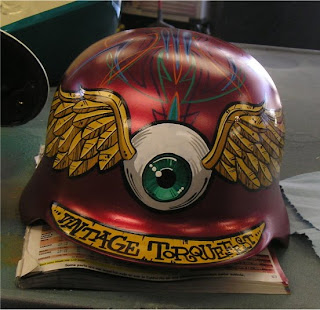 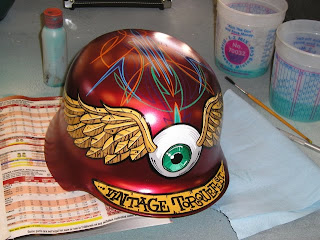 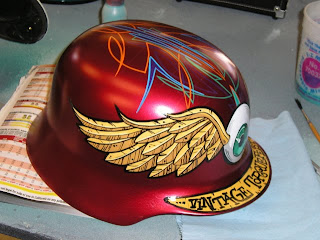 I had a fantastic time at Vintage Torquefest, met a lot of wondrful people, got to hang with some great friends, Jeremy Schirm, Chad Lampert, Matt Marske, Ed Tillrock, Keven Carter, Nick Sinclair, Max Grundy, Jeff Tuckner, The Surf Zombies, The Porter Muffler folks...John Wells...(the list goes on!), saw some killer hot rods, and thankfully- sold a lot of art!
Next up was theRust Revival in Wayland, MO! Another great show! Donated a couple framed prints and two pinstriped panels for the charity auction put on by my Kropduster Car Club bretheren. Looking forward to hitting more shows!
Posted by JonesDesign at 9:29 PM 2 comments: